Rendering Error in layout Widget/Social: Call to a member function exists() on null. Please enable debug mode for more information.
Less More
10 years 4 months ago - 10 years 4 months ago #2035 by graemef
New SUP stuff seen on my travels was created by graemef
I went out to Nuremburg on a last minute dot com trip recently and once again met loads of the windsurf Industry as was, including my ex business colleagues from those days many who are still working with Cobra, or Starboard in Germany (They had a new wide SUP with a full centreboard cassette and a packaged rig aimed at the task of using SUP to re invigorate Windsurfing in light winds). I'd gone to see a new brand as well as my existing Kayak supplier when I walked around a corner and came face to face with this... 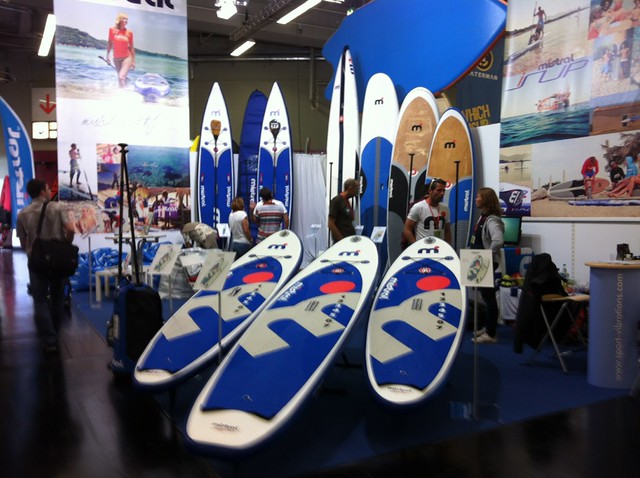 A tug on the heart strings if ever there was, all inflatable, interesting technology that, the Starboard with the centreboard was an Inflatable, a latter day Windglider only stiff thanks to the drop stitch technology that secures the top to the bottom. I hope that gets adopted by the trade it's a step in the right direction I haven't seen any sign of it over here yet, maybe it's still a prototype.


All in all an interesting trip, SUP could be headed in a direction that would benefit everyone in the long term, so I'm now facing a conundrum, should I or shouldn't I, it still looks so ghey on the water (except in waves of course) it was a fascinating day though, I even met Roger (Tushingham) on the way out who whilst happy with his Red brand, aint happy the way sales of windsurfing sails are still headed, so if he's complaining there aint much hope for anyone else.
I'd spent the air flight out there with Gordon Way from Ultrasport who supply Bic and heard another view of what's been going on, he's obviously concerned at the future for kids on Technos racing, funny that all these years later the three of us, him Roger and myself would be together in a room full of kayaks a bit like the way it all started years ago back in the days of the Pickets Lock show, talk about travelling full circle.

Except everyone looks so old now..

Less More
10 years 4 months ago #2037 by graemef
Replied by graemef on topic Re: New SUP stuff seen on my travels
Hah, no tears but with all the ex Mistral guys in the room including Ernsfried Prade, Florian Brunner, Rainer Ramelsberger, to catch up with, a lot of reminiscing, shame they didn't have sails on them..

The good news is they are all still fighting to keep windsurfing alive, whilst using the revenue from SUP that is beginning to develop in Europe, it's also ironical that they all view Red as the market leader now, good for the UK in some respect. This in the iSUP market, I also heard categorically that Starboard is not a part of Cobra which I'd always believed it to be, not that it matters. Cobra are quite big these days, and the biggest part of what they do and still growing is surf as well as industrial stuff. So more good news in that they remain committed to boardsports which would be a disaster if they pulled out.

I had a very interesting day, not necessarily in the way I'd expected, but interesting nonetheless.

Less More
10 years 3 months ago #2073 by galeforce8
Replied by galeforce8 on topic Re: New SUP stuff seen on my travels
Sup Sailing Rules. Best wave board I've ever had, on the basis I can sail it whatever the wind is doing, what ever size the waves are and I always have a grin when I've sailed it. Shame it's a *board