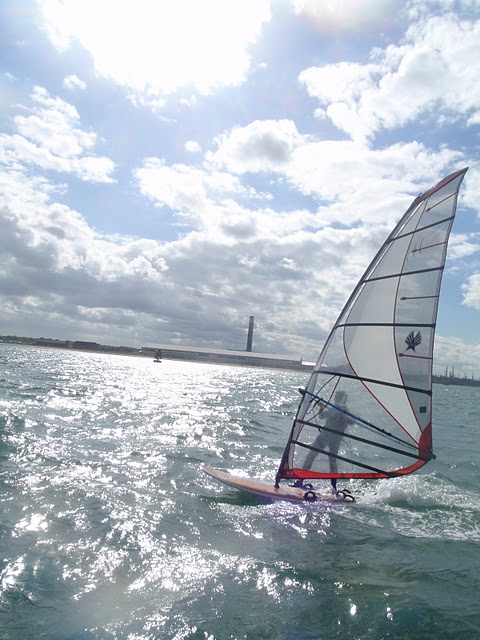 During months of planning, several windows of opportunity had been identified that gave suitable tidal conditions. Earlier weather forecasts were pointing towards an attempt several days later, but at very short notice it was decided to bring this forward to take advantage of a change in wind conditions the following day. We left Calshot in lighter than expected winds with 9.5m sails; the westerly wind direction on offer was our least preferred direction due to the long downwind stretches we would have to endure.

The first hour gave us  doubts of ever completing the challenge, the winds were fickle and the formula board Simon was using was severely disadvantaged sailing upwind in comparison to my James Kona with its daggerboard. The forecast eventually came good and the wind picked up, allowing us to pick up speed and make good progress past Yarmouth on route to the Needles. Initial worries were dispelled with the advantage now reversed; the superior planing speed of the formula board soon became apparent. However, with a safety boat providing essential backup for us both, it was essential to remain in sight of each other regardless of the difference in speeds. The first glimpse of the Needles in the distance was a welcome sight, good progress was being made and we eventually sailed through the iconic landmark ahead of schedule, after approximately two hours and thirty minutes.

A shift in wind direction to North Westerly forced us to sail on a long twelve mile run downwind up to five miles off the south side of the island. With St Catherine’s Lighthouse now in view, it was time to begin a number of shorter broad reaches in what became the most challenging conditions of the journey. The two metre swell proved very difficult for James, his longer board digging into the waves. Uphauling the large sail was now very difficult and tiredness was setting in to weary arms; this was James lowest point and failure due to fatigue seemed a real possibility. A spare rope carried for emergencies proved invaluable; a quick modification allowed him to use his harness to take the weight of the sail when uphauling and reserve his energy for the second half of the challenge.

After six hours of sailing we were passing Shanklin, the water had flattened off and our speed had increased. Being ninety minutes ahead of the expected time gave me a huge boost; There was no possibility of failure from this point onwards. We rounded the corner at Bembridge for the homeward leg along the Solent with perfect wind conditions, giving us over eleven miles non-stop on a port tack. The chimney of Fawley power station gave a perfect reference point to aim for and we were on target to reach our destination without tacking. However, with only five miles remaining another wind shift and drop in strength brought our boards off the plane; it was extremely frustrating to be so close with little progress being made. Eventually one last gust gave us enough wind to complete the last few miles of our journey, dodging the colossal container ships leaving Southampton Water to reach our start point. Tired and blistered, we finally arrived at 1655 after 9 hours and 35 minutes, having sailed just over 76 miles without touching land or needing any assistance. It was a great sense of achievement for us both in a challenge where many have been unsuccessful; as one person who completed the Forces Challenge the previous year put it “more people have climbed Everest”.

We would like to thank James Topping from Southampton University Watersports Centre and his safety boat crew for their support, without which we could not have attempted the challenge.